Gabon’s defence ministry has said the United Nations will withdraw the country’s 450-strong peacekeeping contingent from the Central African Republic (CAR) over sexual abuse allegations. “In recent weeks, exceptionally serious acts that go against military ethics and the honour of [...]

The Federal Government has to mobilise the energies and capacities of youths to minimise national security risks. Minister of Youth and Sports Development, Mr. Sunday Akin Dare, disclosed this in Abuja, yesterday, at the launch of the Nigerian Youth Employment [...]

The United Nations Children’s Fund (UNICEF) says school attacks and student abduction in parts of Nigeria have instilled fear among communities stopping at least one million children from returning to school. In a statement issued on Wednesday in Abuja, UNICEF said there [...]

Tragedy struck in the fight against terror group, Boko Haram, on Wednesday, when a fighter jet involved in the counter-insurgency operation in the North-East bombed a village in Yunusari Local Government Area of Yobe State, killing at least 10 villagers. [...]

President Muhammadu Buhari will address the 76th Session of the high-level General Debate of the United Nations General Assembly at the UN headquarters in New York on Tuesday, September 24, the News Agency of Nigeria (NAN) has reported. A provisional [...]

At least nine people have died in a suspected suicide bombing in Somalia’s capital, Mogadishu, police and witnesses said. The attack on Tuesday has killed and wounded civilians and members of the security forces. “There are still investigations going on [...]

Katsina State Governor, Aminu Bello Masari recently called on residents of the state to defend themselves, following massive cases of abductions and killings by terrorists. It was a clear call on citizens to take up arms and fight back the [...]

President Muhammadu Buhari is seeking the approval of the National Assembly to borrow another $4 billion ($4,054,476,863) and €710 million loan from bilateral and multilateral organisations to fund the deficit in the 2021 budget. The president, in a letter to [...]

Students of the University of Benin have vowed to continue with their protest on Wednesday, as a follow-up to Tuesday’s demonstration at the school which shut down academic activities. The students on Tuesday protested against N20,000 hike in their tuition. [...]

Fitch Ratings, an Internationally renowned rating agency, has upgraded Lagos State ratings from AA+ (nga) to AAA(nga) for its good standing in terms of its debt sustainability and resilience. A statement on Monday titled ‘Fitch upgrades Lagos ratings to AAA, [...] 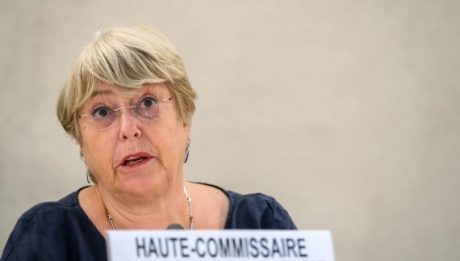 The United Nations human rights chief has said a highly awaited joint investigation into abuses in Ethiopia’s Tigray conflict was unable to deploy to the site of one of its deadliest attacks, the alleged massacre of several hundred people in [...]

Lagos State Signage and Advertisement Agency (LASAA) has announced plans to host the 2021 Out-of-Home Advertising Conference and Exhibition for stakeholders between September 23 and 24, 2021 at the Eko Hotel and Suites on Victoria Island in Lagos. The highly [...]

The police in Sokoto State have deployed officers to areas marked for attacks by suspected bandits in the state. PHope For Nigeria Online reports that suspected bandits had last week written a letter in Hausa language, informing some communities of [...]

No fewer than three persons were reported dead in a flood disaster that ravaged TradeMoore Estate, along Airport Road, in the Lugbe area of the Federal Capital Territory, Abuja. An eyewitness on Monday said the incident happened at about 10pm [...]

BBNaija: I Don’t Owe Anyone An Apology – Boma

A recently evicted Big Brother Naija housemate, Boma Akpore, has said that upon leaving the competition last Sunday, he got a lot of hate from Nigerians. According to him, he had to be spirited out of his hotel by 2am [...]

Guinea’s leader Alpha Conde used to tell journalists that he was the only one who could lead the country. He would also say the military would not overthrow him. On Sunday, he was proved wrong. An elite Special Forces unit stormed the [...]

President Joe Biden, speaking unexpectedly during a visit to the Pennsylvania site of one of the 9/11 plane crashes, again defended the widely criticized withdrawal from Afghanistan, saying the US could not “invade” every country where Al-Qaeda is present. “Could [...]

President Muhammadu Buhari on Friday praised the Igbos’ “enterprising” spirit, saying that it is evidenced they are “in charge of Nigeria’s economy”. Mr Buhari stated this in a thank you message to the people and government of Imo State which he posted [...]

A 23-year-old student of Auchi Polytechnic, Edo State, identified only as Solomon, has committed suicide. According to the News Agency of Nigeria, Solomon, who until his death a National Diploma 1 student of Public Administration, was discovered dangling from the [...]

Kano State government on Friday announced a new Road Transport Authority to regulate and manage the entire transport system in the state. Kano State governor, Dr. Abdullahi Umar Ganduje, who spoke during the flag-off of a National Council of Trans­portation [...]

Over 120 killed in Ethiopia’s Amhara region

Doctors and local officials have said more than 120 civilians were massacred in Ethiopia’s Amhara region earlier this month, but forces from neighbouring Tigray rejected allegations they were responsible. The killings in Chenna village, near the town of Dabat, took [...]

President Muhammadu Buhari Friday has called on health workers to return to their duty posts. He also urged others contemplating strikes to opt for settlement of issues by negotiation, no matter how long it takes. The president made the appeal [...]

President Muhammadu Buhari has appointed Yusuf Ahmed as the Chief Executive Officer (CEO) of Nigeria Atomic Energy Commission (NAEC) for an initial period of three years. The appointment was confirmed in a statement signed by Director of Information for the [...]

Some unidentified gunmen have killed Edozieuno Anakpulu, a former Igwe of Mkpunado Aguleri in the Anambra East Local Government Area of Anambra state. The gunmen killed Igwe Alex Edozieuno Anakpulu on Friday. According to eyewitness reports, Anakpulu was shot dead [...]

Two Las Vegas residents — Norbert Ozemena Ikwuegbundo (28) and Omniyi Jonathan Omotere (35), both citizens of Nigeria — have been indicted for defrauding people seeking to rent houses out of $3.3 million, through a scheme that involved using multiple [...]

Ethiopia’s federal government has said rival forces from the war-hit Tigray region had been beaten in neighbouring Afar region and had withdrawn, but the Tigrayan forces said they had simply redeployed troops to next-door Amhara region for an offensive there. [...]

Governors of the Peoples Democratic Party (PDP) have insisted that the October 30 national convention must hold to elect new officers of the party. The 92nd meeting of the National Executive Committee (NEC) of the party, which held two weeks [...]

Naira in another record fall at black market

Naira fell significantly against the U.S. dollar at the black market on Thursday as the currency exchanged hands with the greenback currency at N540.00, the lowest rate ever traded at the segment. This translates to a N5.00 or 0.94 per cent [...]

A resident of Uburu-Ekwe Street in Ugwuagor, Abakpa Nike, Enugu State, Eke Nweofia, has been arrested by the police for beating his eight-month-old pregnant wife to death during an altercation over dinner on Wednesday. The suspect said to be a [...]

The House of Representatives Committee on Public Accounts has directed the office of the Auditor-General for the Federation (oAuGF) to submit supporting documents for all the expenses it incurred from 2019 to date. The committee requested the office to submit [...]