We are throwing our office door open for you to come and work for some hours. Techpoint.Africa [...]

Tanzania and Kenya are working at a joint power project. Techpoint.Africa [...]

Nigeria’s Bank of Industry (BoI) and All On to finance Niger Delta Off Grid Energy Fund with ₦1 billion Techpoint.Africa [...]

2019: I will begin restructuring Nigeria after May 29 – Atiku

The presidential candidate of the Peoples Democratic Party (PDP) in the 2019 elections, Alhaji Atiku Abubakar, has re-affirmed his commitment to restructuring if elected on February 16. Hope For Nigeria reports that Atiku gave the assurance while addressing thousands of [...]

Buhari campaign team accuses US, other envoys of supporting Atiku

The Spokesman for the Buhari Campaign Organisation, Mr Festus Keyamo (SAN), has accused the United States Ambassador, Stuart Symington, and other western ambassadors of partiality and tacit support for the Presidential candidate of the Peoples Democratic Party, Atiku Abubakar. Keyamo [...]

The Ogun State Governor, Ibikunle Amosun, on Monday, begged angry party members not to disgrace him before President Muhammadu Buhari Amosun made the appeal during the Ogun State All Progressives Congress presidential rally in Abeokuta. The rally, which started immediately [...]

A dress rehearsal of what is likely to happen during the general elections in Ogun State played out yesterday, forcing the presidential rally of the All Progressives Congress (APC) in Abeokuta to be hurriedly brought to an end by the [...]

The numerous intervention schemes notwithstanding, the Central Bank of Nigeria (CBN) has put the existing financing gap in the small business segment of the economy at $158 billion (N48 trillion).According to the apex bank, the quest for inclusive economic growth [...]

National Agency for Food and Drug Administration and Control (NAFADC) has arraigned a businessman, Luke Mbah, before a Federal High Court, Lagos, for allegedly importing codeine-made drugs valued N167 million. Mbah was arraigned before Justice Oluremi Oguntoyinbo on a four [...] 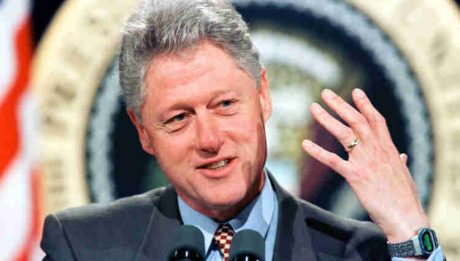 A former President of the United States of America, Bill Clinton, has cancelled his visit to Nigeria on the invitation of the National Peace Committee. He was billed to deliver a goodwill message during the signing ceremony of the National [...]

President Muhammadu Buhari on Monday at the Ogun State All Progressives Congress presidential rally in Abeokuta, narrowly escaped being stoned as suspected thugs pelted the National Chairman of the party, Adams Oshiomhole, with stones and water sachets. The crowd also [...]

El-Rufai, Why Presidency Should Return To South In 2023

While Nigeria is still struggling with the US visa ban, the EU to put Nigeria under visa ban again…..