Browsing the "What the papers say" Category

Much ado about Okowa’s critics

RACISM is a heinous crime tolerated among Africans who are themselves victims. Its demonic venom is entrenched in our socio-political life, to achieve narrow ambitions through tribal periscope. Despite the pretence, we don’t access people who offer themselves for leadership [...]

ABUJA- AS Senators resume today from their two-week recess immediately after the formal inauguration, June 10, principal officers that will run the affairs of the red chambers would emerge today with both the ruling All Progressives Congress, APC and [...]

‘We have allowed political parties to be hijacked by individuals’

Chief Justice of Nigeria, Justice Mahmoud Mohammed The Akwa Ibom State Governorship Election Petition Tribunal which is currently sitting in Abuja has fixed June 24 for ruling on an application seeking the return of the tribunal to Uyo, the state [...]

A resident of Jos, the Plateau State capital, Garuba Usman, has expressed reservation with the order of President Muhammadu Buhari, directing that military checkpoints across the country should be dismantled. As early as 7.30am on Tuesday, some security operatives, especially [...]

THE International Finance Corporation (IFC), a member of the World Bank Group. Photo: techcabalThe World Bank announced Tuesday it will provide up to $ 500 million for reconstruction in quake-devastated Nepal which is preparing to host a major conference to [...]

Nuclear PlantIran’s parliament passed a bill Tuesday obliging the government to safeguard the country’s “nuclear rights and achievements,” despite talks with global powers on curbing the Islamic republic’s disputed atomic programme. The measure was met by anger from President Hassan [...]

South Korea’s ageing victims of Japan’s wartime sex slavery said Tuesday they would file a $ 20 million lawsuit next month at a US court to seek financial compensation from Tokyo. The suit from 10 “comfort” women led by Kim [...]

United Nations- image source climateactionprogrammeThe UN Security Council condemned the attack by Taliban insurgents on the Afghan parliament in Kabul, denouncing the “blatant disrespect to democracy.” In a declaration adopted on Monday night, the 15 member countries “condemned in the [...]

A song for womanhood By Niran Adedokun

Niran Adedokun – I have been in the mood to celebrate the women in my life for a while and should seize the opportunity of the International Women’s Day to register this undying passion f you call me a ladies’ [...]

My Probe, A Fraudulent Witch-hunt – Amaechi

My Probe, A Fraudulent Witch-hunt – Amaechi Anayo Onukwugha[1] — Jun 22, 2015 3:46 am | Rivers State Governor Rotimi Amaechi has described the so-called probe of his administration by his successor Nyesom Wike, as a sham, a fraudulent witch-hunt [...]

‘There’s Need For Nigerians To Support Buhari’ By Ekele Peter Agbo[1] — Jun 22, 2015 3:58 am | The organisers of ThinkNigeria Development Initiative (TDI) have called on Nigerians, especially the leadership of the All Progressives Congress ( APC), to [...]

Thirty-six states and the Federal Capital Territory (FCT) have received over N216billion from the federal government through the Universal Basic Education Commission (UBEC) for the improvement of basic education in nine years, from 2005 -2014. This was revealed in a [...]

Emir Prays For Release Of Chibok Girls Agency Report[1] — Jun 22, 2015 6:15 am | The Emir of Bauchi, Alhaji Rilwan Sulaiman, has prayed for the quick release of the Chibok girls. The emir stated this during a courtesy [...]

Some rescued migrantsSome 1,800 people took to the streets of Berlin on Saturday to express their solidarity with migrants seeking refuge in Europe and against austerity measures in debt-ridden Greece, local police told AFP. In a demonstration held on World [...]

Heads Roll In NIMC As FG Probes Commission NAN — Jun 20, 2015 11:50 am | The Federal Government has inaugurated an independent committee to address the labour crisis between the National Identity Management Commission (NIMC) and the Association of [...]

Negotiations are expected to resume this weekend between Greece and its EU-IMF creditors seeking a deal on bailout funding for Athens, ahead of a crucial summit of eurozone leaders to avert a Greek default and likely euro exit. European Union [...]

We deceived victims by roaring like lions – robbery kingpin

By Evelyn Usman A cursory glance at the three able-bodied youths whose ages range between 18 and 26, will easily pass them for malnourished and ailing individuals, judging by their fragile and seeming innocent and harmless looks. But how wrong [...] 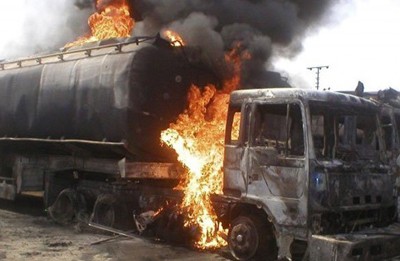 A 140-year-old man, Ramon Agbogunleri whose houses were gutted by the fire caused by tanker explosion in Idimu has cried out for help from Lagos State Government. Agbogunleri who has been on bed since the incident occurred called on the [...]

A passenger bus on Saturday plunged off a mountain road into a gorge in northern India, killing 14 people, a local official said. The accident happened when the driver lost control, veering the bus off the road and into the [...]

Ambode Mulls ‘Rent And Own’ Policy In Lagos State Housing Programme NAN — Jun 20, 2015 11:54 am | Lagos State Governor Akinwumi Ambode on Friday said the state would consider adopting a ‘rent and own’ policy in resolving its [...]

By Agaju Madugba Less than four weeks after his inauguration on May 29,  Kaduna State Governor, Malam Nasir El-Rufa’i, may have begun the implementation of aspects of the promised “change” which he believes will restore what he has consistently described [...]

Buhari’s Wife Urged To Be Advocate Of Child’s Rights

Buhari’s Wife Urged To Be Advocate Of Child’s Rights NAN — Jun 20, 2015 9:51 am | Ms Onyeka Onwenu, the Director-General, National Centre for Women Development (NCWD), on Friday urged President Muhammadu Buhari and his wife, Aisha to be [...]

Lagos State governor, Mr Akinwumi Ambode on Friday said the state would consider adopting a ‘rent and own’ policy in resolving its housing deficiency. In a chat with media executives at his office in Alausa, Ikeja, Ambode acknowledged that [...]

Ozil: I Will Decide When I Want To Leave Arsenal, Not Other People