Stakeholders in the fertiliser industry have pleaded with President Muhammadu Buhari to ensure that the current Presidential Fertiliser Initiative (PFI) is sustained to ensure food sufficiency in the country.

The stakeholders made the call in separate interviews with the News Agency of Nigeria (NAN) during a tour of fertiliser blending plants in the country by the Fertiliser Producers and Suppliers Association of Nigeria (FEPSAN). 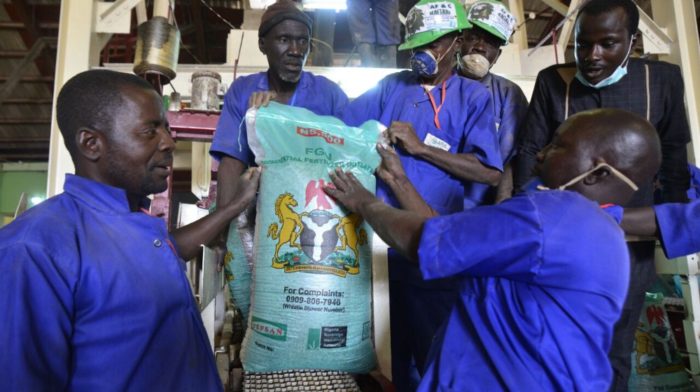 Barrister Ibrahim Shehu Birma, Chairman Superphosphate Fertiliser and Chemicals (SFC) Limited Kakuri, Kaduna who pleaded with the federal government to fashion out ways of sustaining the current fertiliser programme said the PFI had achieved so much in eight months of its inauguration.

“The problem of programmes like this is sustainability; there is no doubt about that. At least we are able to have fertiliser in good time even though supplies are being distorted here and there which is as a result of challenges and teething problem of every new project.

“To sustain it, I will want government to leave it squarely in the hands of the Nigeria Sovereign Investment Authority (NSIA) which funds the programme; they have taken a bold step.

“I will encourage the government, the presidency, the ministry of finance and the CBN to look at it as their baby to give room for sustainability.

“There are outstanding payments from 2004 till date but in the case of this initiative, issue of outstanding does not even arise because the NSIA has taken the bold initiative of paying for every component of the blending material.

“Money is also given to blenders at an agreed blending fee. So, literally government is not owing, it is now a product of NSIA which will now sell the product and keep their money at a bare single digit rate.

“If they can sustain the initiative having seen NSIA’s work as a corporate social responsibility to the society, then, the programme can outlive any government,” Birma said.

Akanet called for sustainability of the initiative saying that farmers and petty traders have benefitted from the programme through various cooperatives.

“In the past we run shift in the company but since the coming of this programme, we now work round-the-clock and this led to hiring of more workers.

“In 2011, we produce just 1/10 of what we are producing today and the constant flow and availability of raw materials has given us a wider market compared to what it used to be.

He applauded the efforts of the security agencies especially the DSS for their routine check and monitoring of raw materials.

Akanet explained that the constant monitoring of the blending plant by the DSS was to ensure that materials like the urea which can be used in the making of Improvised Explosive Device (IED), do not enter into wrong hands.

Also speaking, Haruna Ibrahim, an agro dealer based in Kaduna, rated the PFI as the best fertiliser programme initiated by any government in Nigeria.

He said: “there is price control; there is also quality and availability of the product. Before now, we import fertiliser, but now, we source material locally. Indorama Limited, a company based in Port Harcourt, produces some of the materials.

He pleaded with the government to encourage the establishment of more blending plants in Nigeria.

Eneffiong Victor, a staff of Fertiliser and Chemicals Limited (F and C), Kaduna, said the fertiliser initiative restored hope in his family after many years of idleness.

Victor, who hails from Akwa Ibom State said as a staff of the company he had a small portion where he cultivated some crops. “The company gives us the waste swept from the floor after production. We apply it to the crops.

“Before now, we don’t collect salary because there is no work. But, this Buhari government came and empowered us. I can’t remember us working 24 hours before now; we work for 8 hours and go, but now, we are begging to rest,” he said.

NAN recalls that President Buhari in his Independence Day broadcast highlighted the Federal Government’s pro-activeness in its diversification policy on agricultural especially rice and fertiliser revolutions.

COVID-19: Kaduna Has Not Reopened Markets, Places Of Worship