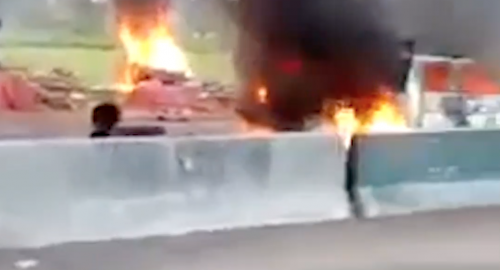 Dare-devil gunmen continued their assault in the South-East region of the country by attacking a checkpoint of the Nigerian Army on Sunday, burning down the operational vehicles.

According to an eyewitness, the gunmen invaded the Ukworji Checkpoint along Owerri-Onitsha Road in Imo State and rained bullets on the personnel, forcing them to flee.

It is not clear yet if any of the army personnel was shot dead.

“Soldiers in Ukworji checkpoint, along Owerri Onitsha road escaped death as they ran away on sighting the unknown gunmen who invaded the checkpoint and set all the operational vans on fire,” a witness, Chioma Kanu, stated on Twitter.

Security operatives in Enugu State last week had their encounter with the gunmen who seemed to be gaining more effrontery to attack uniformed personnel.

Troops of the Nigerian Army have been battling with gunmen whom some residents have allegedly referred to as operatives of the Eastern Security Network in Nsukka town of Enugu State.