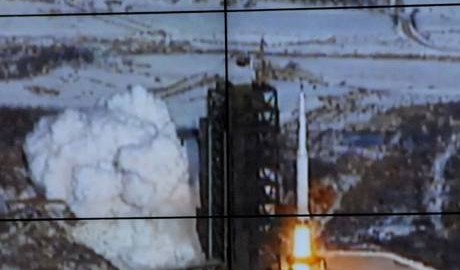 In a third day of fiery rhetoric the North Korean regime today threatened its neighbour South Korea with war if Seoul joined a new round of tightened UN sanctions.

The reclusive North Korean regime’s statements have been increasingly uncompromising over the last three days culminating today in an announcement that: “Sanctions’ mean a war and a declaration of war against us.”

A new UN agreement, passed on Tuesday, will extend the sanctions already imposed on North Korea after it held nuclear tests in 2006 and 2009.

The current rise in tensions and extension of sanctions follows Pyonyang’s defiant decision to push ahead with a long-range rocket launch on December 12 – insisting it was a peaceful mission to place a satellite in orbit.

Despite the insistence of the regime that the test was peaceful the rest of the world saw it as a banned ballistic missile test.

Today’s warning, which was carried by the official Korean Central News Agency, once again raised the level of rhetoric: “If the South Korean puppet regime of traitors directly participates in the so-called UN ‘sanctions’, strong physical countermeasures would be taken,” the North’s Committee for Peaceful Reunification of Fatherland said.

“Sanctions amount to a declaration of war against us,” said the committee, which is the prime state body responsible for inter-Korean dialogue and exchange.

“As long as the South Korean puppet traitors’ regime continues with its anti-DPRK (North Korea) hostile policy, we will never sit down with them,” it said.

Pyongyang reacted furiously to the new resolution yesterday stating that it would proceed with a “high-level” nuclear test in a move aimed at its “arch-enemy” the US.

The White House condemned the move calling it “needlessly provocative”.

Washington has also expanded sanctions against North Korea, aimed at targets including a Hong Kong-based trading company and two North Korean bank officials based in Beijing.

Despite the ferocity of the threats from North Korea experts say the country is still a long way from seriously threatening the US mainland.