Globol Staff May 19, 2021 Government and politics No Comments on Wabba Tells El-Rufai: Come And Arrest Me 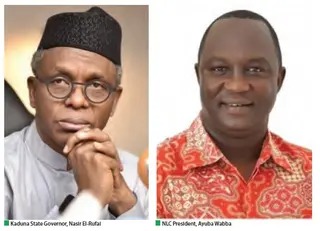 The Chairman of National Labour Congress (NLC), Ayuba Wabba, has dared the Kaduna State Governor, Nasir El’rufai, who declared him wanted for calling on strike in the state, to arrest him.

The NLC boss said, “let the governor come and arrest me” as he led the workers for a peaceful protest in the state capital.

Speaking in a short interview at NEPA roundabout while leading thousands of workers, Wabba said, “the strike was not about me.”

“Let him come and arrest me. We are here and waiting for them,” Wabba said.

Daily Trust observed during the protest that the striking workers blocked the main road in the town, forcing motorists to divert to other routes. They were displaying placards with different inscriptions.

The governor had earlier Tuesday declared Wabba and other labour leaders wanted for alleged economic sabotage, placing a bounty for anyone with information about their whereabouts.

Wabba, however, led the procession of striking workers to the government house, daring the governor to arrest them.

Banks, hospital, train station, airport have been shut down while the state is plunged into darkness as electricity workers also joined the mass action.

Wabba had emphasised that the organised labour would not back down until its demands are acceded to by the governor.

NLC and its affiliates embarked on a five-day warning strike in the state to compel the state government to reverse its decision over the sacking of over 7000 state civil servants.